The brief for this project required the artists to:

It was a collaborative project for which I teamed up with Karen Allerton and in turn we worked closely with the other partners involved. The programme of workshops with Comberbach Primary was very exciting. The ideas for the finished sculptures evolved through a series of activities, including printing, 3D model making, salt dough modelling and wire drawings to name just a few.

“We made models of the boat lift and things we saw on the trip but we reconstructed them in our own way.”  Saff, Y6

“Most of us made salt dough objects with the artists. We made natural and historical objects, things like salt tubs, flowers and butterflies.”    Sarah, Y6

We had fantastic support from FOAM – Friends of Anderton & Marbury. Some of the Friends attended the school workshops to lend a hand and offer insightful contributions to the idea development.
With the Y6 pupils, we explored various forms and shapes that the finished piece might take. As a group, we thoughtfully discussed what key qualities the finished work should have and what ideas it might convey; the practicalities and potential choice of material(s).

Karen and I showed the class our own initial sketch designs and then they produced further ideas. We assessed the proposals together and then, with all the comments and feedback in mind, I produced our official design proposal for approval for FOAM and the commissioners.

The partners were all delighted with the design proposal and we were given the go-ahead to produce the work. A few minor details were modified, following discussions with our fabricators Abbey Stone Works in Keighley, Yorkshire and Luke Lister Blacksmiths in Stockport, Cheshire. 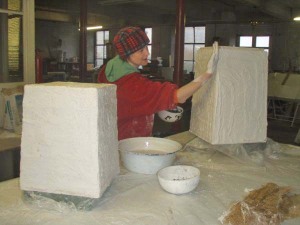 Producing the plaster of paris originals for the stone blocks

The types of stone used in the cast blocks were selected to represent aspects of the Anderton Park site. The darkest granite blocks were influenced by coal and carbon and the top sections are white with dolomite that sparkles just like salt crystals when it catches the light. We wanted the obelisk sculptures to convey the notion that this beautiful nature park evolved as a result of its industrial history and the waste products that were left here. The forged steel work represents the patterns in the boat lift that blend out into images copied from wire drawings that Y6 made of some of the natural flowers and insects that now live here – their position at the very top is to show the triumph of nature over all else.

“Local artists Tracey Cartledge and Karen Allerton, who are experienced both in working with schools and community groups, and in producing public art, were selected to undertake the work. Comberbach Primary School agreed that its Year 6 pupils could become involved in the project. Their participation included visits to Anderton Boat Lift, a river trip supported by British Waterways and a visit to the Salt Museum to explore the local impact of salt mining. Several workshops were held in school to produce models and images representing the industries associated with the area and the nature park, both in the past and today. This artwork formed a major focus in developing the sculptures and Tracey and Karen have managed to incorporate many of the images in the final pieces. The two magnificent finished sculptures have been installed in the path leading to the Boat Lift. Plaques installed at the bases of the sculptures show that many different organisations were involved in this successful partnership project: INEOS Enterprises, Cheshire West and Chester, British Waterways, WeaverValley,ComberbachPrimary School and FoAM.